What New Beginnings Are Made Of 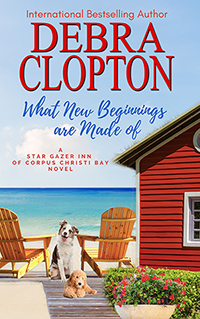 WHAT NEW BEGINNINGS ARE MADE OF

She’s a fifty-five-year-old widow feeling like she’s lost herself.

On a whim of her aching heart, Alice McIntyre buys the Star Gazer Inn and is looking for a fresh start…something to put a spark back into her life.

But first she has to tell her four sons, who have problems of their own but have smothered her with their protective instincts. She’s lived on the huge South Texas ranch just outside of Corpus Christi since their father carried her over the threshold. She’s raised them on the massive McIntyre Ranch—one of the largest, wealthiest in Texas. It’s been her home and theirs. Will they understand that it’s time for her to leave? Time for her to move on?

Jackson McIntyre is shocked by his mother’s announcement. Guilt-ridden in the aftermath of his father’s accident, Jackson is determined to do whatever it takes to help his mother find her way to move forward. But this new idea of hers has him reeling.

Nina lives next door to the inn and is living a quiet life, keeping a low profile. She has her reasons. Will the opening of the inn and her new neighbors, especially the oldest son of the new innkeeper, tempt her to step back into the light and out of the shadows of her past?

Lisa, Alice’s best friend and recent divorcee, has been traveling the world since the breakup that left her shaken and feeling just as lost as Alice. A brilliant cook with a flair for entertaining, she loves Alice’s idea and joins her to open the inn. But Lisa has her own secrets.

Can these two friends, and their new neighbor Nina, find fresh starts as they ready the Star Gazer Inn for its new beginning?

Will Nina find the courage to take one more chance on love with her new friend’s son?

Three women find friendship and courage on the shores of Corpus Christi Bay. Come visit the Star Gazer Inn, with a side trip to the McIntyre Ranch, as Alice finds her way between two worlds.

This new series follows Alice, her sons, and her friends—and new loves—on the South Texas coast with its sparkling topaz water.

You’ll want to dip your toes in and stay awhile.